I know everyone has probably written their reviews for this movie but I wanted to write it a bit later after discussing it with everyone and reading some other reviews too. So instead of talking about the plot I will be talking mainly about the characters, especially the newly introduced ones. But I must admit I did love the plot (although it was extremely similar to the plots of past episodes). Everything about the movie seemed great too- the actors and actresses did a great job, the lighting and sound was obviously great and I really loved how J.J Abrams paid homage to the original movies. So here is what I think of the characters:

Rey (played by Daisy Ridley) who is the new main character and who is shown as a powerful and clever female is definitely one of my new favorite characters. Her past is very mysterious and all we seem to know about her is that she was left at Jakku at a young age and learnt to be a scavenger. She is also a talented pilot and fighter. She first became involved when she found BB-8 and later Finn. Another thing that makes her extremely interesting is that The Force is very, very strong with her and the lightsaber that was earlier used by Anakin Skywalker (Darth Vader) and Luke Skywalker called to her. This has got fans all over speculating who her parents are because we all know that The Force is very strong in the Skywalker family. Even though her piloting skills remind us of Han Solo I still don’t think he and Leia are Rey’s parents. Neither he nor Leia mentioned a daughter and Kylo Ren didn’t recognize her either and only mocked her for wishing Han Solo was her father. In my opinion I think she may be Luke’s daughter. The movie ends with her finally finding Luke who has been gone for 20 years and whose location had been previously unknown. I look forward to seeing her (hopefully) as a Jedi in the next episode. 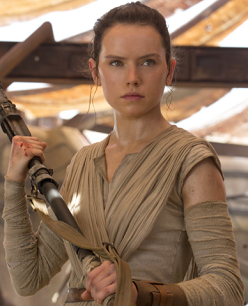 Finn (played by John Boyega) formerly known as FN-2187, is obviously the sort of lost, confused, funny and sweet character you can instantly take a liking to. Formerly a stormtrooper, he deserted his post and eventually ended up joining the Resistance against the First Order. He became friends with Poe Dameron, a member of the resistance, when they escaped the First Order together however they were separated when they crashed in Jakku where Finn eventually met Rey. They escaped in the Millennium Falcon and eventually met Han Solo who seemed to be a legend as both a rebel fighter and a smuggler. At first Finn wanted nothing to do with the Resistance or the First Order and instead just wanted to hide but seeing that they had captured Rey (who he seems to have thing for) he decided to join the Resistance and fight against the First Order. After seeing Kylo Ren kill his father Han Solo and hurt Rey he briefly uses the lightsaber to fight Kylo Ren but is unsuccessful. His past, similarly to Rey’s is unknown, as he was taken to be a stromtrooper at a very young age and didn’t remember his past. People do seem to be hinting that Lando may be his father but of course there isn’t any solid evidence to show this yet. The movie leaves Finn unconscious but seeming to be in recovery as Rey leaves his side to find Luke Skywalker. Poe Dameron (played by Oscar Isaac) is again a new character who is very important and interesting to watch. He worked The New Republic and later with the Resistance, he is an amazing pilot and he is insanely hot. In the very first scene we see him give BB-8 the information given to him by Lor San Tekka, who apparently knew where Luke was, to keep safely. It has a part of the map that leads to where Luke Skywalker is. Unfortunately, he is captured by Kylo Ren who learns that Poe gave it to BB-8. Poe is than saved by Finn, a rebel stormtrooper and as they both escape he insists they go back to Jakku to find BB-8 even though Finn insists this would be a mistake. As they are arguing about where to go they are hit and end up in Jakku anyway but Poe seems to have died in the crash as their Finalizer explodes and Finn is left on his own. However, we see Dameron again and it turns out he landed on a different planet and is now back with the Resistance. In the end we see him bid farewell to Rey as she goes to seek Luke.

Kylo Ren (played by Adam Driver) is the son of Han Solo and Princess Leia Organa who turned to the Dark Side of the Force. From when he was young he seemed to be different and so his parents sent him to Luke (who at the time was training new Jedi’s) to train him to be a Jedi. However, this idea ended horribly as Ben became Kylo Ren and ended up killing all the other Jedi’s and joining the Dark Side. This incident devastated Luke who left without a trace. Kylo Ren is obviously the villain here and he believes he is continuing the work of his grandfather Darth Vader. Of course it is hard to take over the place of the antagonist from a famous villain like Darth Vader but watching him kill his own father Han Solo (which was the most depressing death ever in my opinion) who was unarmed proved the point really well. The Force is very strong with him just like the rest of his family however we see him being overpowered by Rey both when he tries to get information out of her and when they have a fight in the woods. In the end of the final battle between Kylo Ren and Rey, Kylo is injured but is rescued by General Hux who was commanded to do so by Supreme Leader Snoke as he wanted to complete Kylo’s training.

This is the end of the first part of this review! Hope you enjoyed it and don’t forget to like, share, follow and comment about what you thought of The Force Awakens and who your favorite character is.